At Leak Insure we are constantly reminded why we came up with the idea of an absorbent sachet for underwater cameras. On a regular basis we get thank you emails from our customers telling us how our sachets have saved their expensive cameras.

Below are just are few.

During a recent underwater photography competition one of our regular customers experienced problems with his camera. Luckily he had Leak Insure sachets installed.

“After 10 minutes or so into the 3rd dive I saw a red LED shining. Hmm never seen that one before. What could it be… Oh no it’s the leak detector!
Is it broken? or do I have water in my housing?

As I have a transparent housing I can easily check. Looking… yep some drops here and there. Nothing too serious I hope. As always I had a Leak Insure sachet installed.
So at this time my dive buddy Ulf was holding my snooted strobe and I showed him thumps up.
He replied by raising the snooted beam some. No No No, UP. So he raised it even more.
Then I showed him my housing and the shining LED. Now, he understood!

Up we went and in the boat. Dried the camera and saw that everything seemed to be OK. The Leak Insure sachet had taken care of all the water!

The reason for the leak was that I forgot to put the lid on the vacuum connector. Well, I plugged it and started to create a new under-pressure with the pump. Bam! The pump broke! Luckily we were able to fix it and everything was fine. And we won the whole competition!

So, thanks for the sachets you sent me. I will continue to use them and to show and talk about them wherever I go”.

By Dave
from West Midlands, UK
About Me: Casual Photographer

I have been using your product for a couple of years or so having first bought a tub of sachets at the Dive Show.

I have used them all over the world and they have kept my housing moisture, and therefore, fog free. However a couple of weeks ago I was diving in Lembeh Straights, half way through a dive trip, and I became aware of distortion to the image on the screen and to my horror there were water droplets on the inside of the port. Worse still on further inspection there was a pool of water in the corner of the housing. I was at 25m and signalled to the guide that I had to get up pretty quick. We ascended safely and en route I held the housing such as to keep the water away from the camera and toward the sachet. Ditto in handing the camera back on to the boat.

ASAP back on board I opened it all up to find a totally dry camera and a fully engorged sachet which had just kept drinking up the water, not a full flood I grant you but enough to have ruined the camera under other circumstances. An hour later with a rinsed, regreased (but camera free) housing I was back in the water and a couple of hours after that I was up and running taking pictures again.

I just wanted to say thanks and let you know that you have one very satisfied and grateful customer!

Name: Bassem
Which Camera do you have? Nikon D7000
Which underwater Housing? Aquatica AD7000
Did the sachets fit? yes (two)
How many sachets did you use? 2
Have you used Leak Insure sachets before? No

Bassem’s Story
Nikon D7000 in an Aquatica housing AD7000, took water. The Bulkhead strobe connector got loose and water went in…miracle no damage to my camera NOTHING, nor the housing thanks to your product. I had two sachets in, they absorbed all the water that went in.
Great product, worth every cent and more, honestly the damage could have easily been gigantic.

Last friday, it was my turn to suddenly realise that my brand new uw-housing (2nd dive with it!) holding my new camera (Nikon D7000) suddenly at the end of a dive was starting to leak!!!

It was a control (for AE-L/AF-L) that was leaking, so it had nothing to do with me not being careful with the o-rings etc.

Yes, I had tested the housing before I went diving with it and, I had already done a 30m dive with it the week before.

Salty water was slowly pooring into the uw-housing and I did NOT panic! NOT?
Yep, I was actually pretty calm, annoyed but calm. Am I very rich or especially stupid? Nope, on the contrary; I was insured: Leak insured!

What? “What company is that, that will restore your images, give you a new camera and underwater housing in a snap” you may ask yourself.
Well, I don’t know of any company that does that for you, but what I did have was three sachets from leak insure. They were installed at the bottom my my uw-housing and nicely sucked up all the water that was coming in.
The camera is weather sealed so it can handle a little water, but only a little and during that dive I had shot some macro video footage that I was very happy with.
I had been down to around 30m for quite some time so I could not just surface.
I realised that if I did not touch the control, water stopped coming in, but already pretty much water had leaked into the housing as I had been using the control alot (for focusing).

At that moment I swam to my buddie who was taking pictures a few meters away and realised that I didn’t know the sign for “f*ck, my uw-housing is leaking!” (do you?). I was pointing and doing all sorts of signs but he only understood the thumb UP sign and we slowly aborted the dive, did our safety stop and when we finally surfaced he asked me what the problem was. I told him that my camera flooded and he said “how could you stay so calm”. I told him about my “insurance” and he got very curious.

Well to cut a long story short I just wanted to share with you how a terrible incident ended quite happily. The cost of the leak insure sachets is very little and I am so happy I remembered to install (3 of) them prior to the dive. As it was a new housing I must admit that I almost forgot to.

So did a sachet save my life last night?
Well, for sure 3 sachets saved the life of my camera and it was last friday to tell you the truth… But, as it also saved my video footage (that turned out to be great!) and it prevented me from getting a “heart attack”. I even made a second dive with the camera that day. I reprogrammed the button on the camera so that I could use another control for the same function, did not use the leaking control, installed new sachets and got even more great video footage to bring home.

I, of course, had to send my uw-housing for repair, which really sucks, but the camera and the video on the memory cards are still alive and kicking. Hopefully the uw-housing company will be nice enough and asap send me a new housing. It was more or less a DOA.

No, I don’t work for leak insure in any way, I am just a happy customer and I just wanted to help you get a little extra marginal in case the worst thing happens to you too.

Leak Insure Sachets Save another SLR and Housing

As more and more people start to use our sachets, we are getting reports and letters of thanks from our customers. The comment below was received with Joseps second order.

“The standard leak insure sachet saved my camera (a Nikon D300 in a Subal housing ) while I was diving in Komodo (Indonesia). The o-ring was misplaced and when the leak alarm went off I took my housing out of the water. The sachet was completely expanded and my camera was saved ! Thank You!” 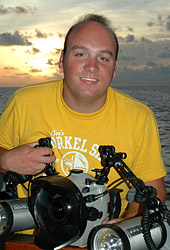 Dr Alex Mustard trained and worked as a marine biologist, but since 2004 has worked full time as a professional underwater photographer and author.

I recently sent some samples of our Leak Insure sachets to Alex so he could review them for us. Niether we or Alex expected them to be used in anger during the review, but we were wrong!.

“This year I am experimenting with a very large dome port for split-level photos. But despite having months for the build, it was only finished the day before the shoot and it didn’t fit on my housing properly, leaking slightly, but consistently. I taped the seals up the best I could and put all the sachets I had in the housing as insurance. It stayed dry all the time, until the final afternoon on Lundy Island (UK), when it started to leak. I got out immediately the leak alarm went off and found the housing and camera almost dry, but the sachets expanded, suggesting a leak of a couple of more than 100ml (third of a coke can). The camera was totally safe!” 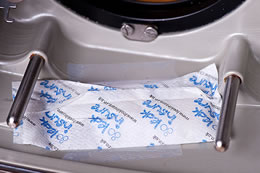